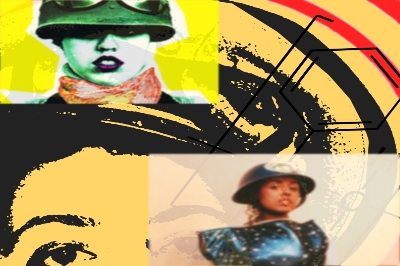 When a 1979 BBC documentary titled “Who is Poly Styrene?” introduces us to the punk singer’s work, we become utterly fascinated. Poly Styrene was the first woman of colour in the UK to front a successful rock band. With help from Poly’s daughter Celeste Bell, musician Rhoda Dakar and archival audio from Poly herself, this episode explores why her work looks, feels and sounds so relevant today.

I know your antiseptic, your deodorant smells nice
I’d like to get to know you, you’re deep frozen like the ice
He’s a germ free adolescent, cleanliness is her obsession
Cleans her teeth ten times a day
Scrub away, scrub away, scrub away the S.R. Way

Marianne Elliott, better known as Poly Styrene, formed the punk band X-Ray Spex as a twenty-year-old in 1977. (Polystyrene is an inexpensive, clear, hard and brittle synthetic aromatic hydrocarbon polymer that can be solid or foamed.) With songs like “Germ-Free Adolescents”, “Plastic Bag” and “Oh Bondage, Up Yours!” the music of X-Ray Spex brings together the many worlds of Marianne Elliott and Poly Styrene: the woman and the artist; the mother and the daughter; the punk and the hippie — all united by a willingness to laugh at and expose the limitations of the throwaway culture of the time (and of today).

Arena’s gritty 1979 documentary flies to us straight out of the past, clear as day and with prophetic lucidity. Directed by Ted Clisby, it is gritty (there’s no better description), but it’s also personal and warm, with its aesthetic beautifully anchored in a storytelling past that also endures. Just like Poly Styrene’s lyrics, and precisely because it is a type of storytelling we don’t use so much anymore, the documentary and the music are out of time, and somewhat comfortingly both feel fresh, even if the sound and the colours are a bit muted after the passing of forty years and the digital changes to design and recording in that time. As an exhibit of deliberate and ‘slow storytelling’, this documentary is a rare portrait of a strong and loud woman singing her way through a world, an industry and an era dominated by white men.

Poly Styrene’s images, lyrics, art, clothes and music reflect as much on life during the synthetic Seventies as they do on the post-pandemic world ahead.

This episode was recorded in collaboration with
Speaking Volumes and Your Local Arena — Lucy Hannah.