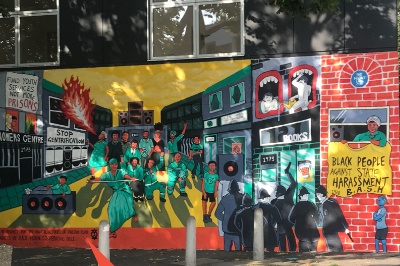 A fete in a cemetery, a tiny underground mail train, and a museum in a shopping centre. Come and celebrate everything that’s NOT the British Museum.

Bug hunts, whittling workshops, crypt tours, a petting zoo, ice cream — a ‘typical’ open day. It’s spring and there’s still a chill to the air, but after months of lockdown we’re enjoying being outside. Before arriving if you’d asked me who’d be at the open day I’d have said three history buffs and a dog — but the place is bustling with hundreds of people: market stalls, a community choir, a ‘murder of goths’ (about 30, I’d say). The cemetery is being re-wilded, and as the forest reclaims the place, the wildlife has returned — mostly birds and squirrels, but on one walk we took here in the depths of the winter lockdown, on an overcast day with snow all around, we saw foxes darting between the gravestones and trees. Today, though, there are too many people for foxes. We finish at a pop-up cafe near the Scottish Martyrs monument, with tea and scones and jam. My nan used to make scones like that. The five Martyrs campaigned for parliamentary reform, and for their troubles were transported to Australia in 1794.

Tunnels running east–west under London carrying narrow gauge driverless trains and delivering millions of letters a day. What more could you want? Royal Mail began as the personal mail service of one of the English kings. Some time later, if you could afford it, you could send letters where the recipient paid for them on arrival. When the Penny Black stamp was invented, the first adhesive stamp, postage was democratised and became accessible to anyone. By the 1920s millions of letters were being delivered to Londoners every day. The mail rail opened in 1927 to counter London’s congested streets and the ensuing delays. In the 1930s the GPO established a film unit. ‘Night Mail’ is its most famous production (Written by W.H. Auden). On our visit to the Museum we watched the surrealist jaunt ‘Love on the Wing’ (1939) by Norman McLaren. In theory it was an ad for the postal service, but the images plugged straight into my brain and I have no idea what it was about.

Popping into Sainsbury’s to grab some toilet paper? Why not stop at the Migration Museum? It’s Saturday morning and we bus it to Lewisham shopping centre. We sit up front of the top level of the double decker bus (for only two pounds you get a comprehensive view of the city, and every trip is like a mini tour). Founded about 20 years ago, and without a permanent home at the time, the MM was initially a series of collaborative exhibitions and events travelling all over the UK, including London, Oxford, Leicester and Edinburgh. From 2017 to 2019, it was based in Lambeth, then it moved to Lewisham. The bus delivers us to Hight Street’s bustle: market stalls selling fresh fish, fruit and vegetables, clothes, fabrics, and street food from Africa, Asia and the Caribbean. Nearby are Polish and Italian delis, Turkish and South Indian restaurants, and my favourite fish and chip shop in London: ‘Something Fishy’. The décor is straight out of the 1970s, and alongside an array of different fish (and chips) they serve pie and mash, and jellied eel. Before we head into the centre, Lewisham’s hustle calms me, makes me feel at ease with London on those days I feel anxious. It’s a human scale that feels about right; the perfect place for the Migration Museum.