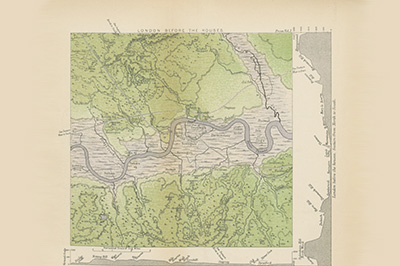 This episode uncovers lost rivers, a smelly ogre and a magical reawakening.

Once upon a time there was a river…
I love rivers. The Birrarung (Yarra) in Naarm (Melbourne); the Murrumbidgee skirting Canberra; how the Maiwar (Brisbane River) psychologically and spiritually dominates the city of Meanjin (Brisbane) like no other river I’ve encountered; the powerful convergence of the Derbarl Yerrigan (Swan) and Djarlgarra (Canning) rivers in Mooro, Goomap (Perth); the contradiction that is the Thames (I’ve still not spent any time with it); and the lost River Peck, a tributary that gives its name to Peckham, a neighbourhood to the south west of Telegraph Hill (which sits at the northern tip of what was once the Great North Wood).

Once upon a time there was a river…
The story of Australia, the driest inhabited continent, begins and ends with water. The original colony site, Kudgee (Botany Bay), didn’t have fresh water, so another site “with a run of water through a very thick wood” was found at Warrane (Sydney Cove). This was the “Tank Stream” (named after tanks cut into the sides of the bedrock to capture and store water). As the colony’s main water source, it was so fouled by the colonsiers that they soon had to cart water in from a nearby wetland. When that ran dry, they ventured further west on the promise of a “Rio Grande” or “Mississippi”, and on the back of the myth of an illusive inland sea (a tale for another time). Today the Tank Stream is lost under the streets of Cadi, Djubuguli (Sydney). I heard this growing up, but didn’t know England had a rap sheet as long as your leg. After ruining London’s streams, brooks and creeks they travelled to the other side of the globe only to repeat their mistakes.

Once upon a time there was a river…
The River Peck is mostly underground now; one of dozens of tributaries whose waters were redirected into the shit-carrying sewers. Here and there, though, before it hits the pipes, The Peck pops up to remind us: the brook in Peckham/Rye Common; a shallow depression running alongside East Dulwich Road; a bubbling spring in a basement, which is then pumped back into the river system; or a stream through the cellar of a pub. Where Shona grew up on the outskirts of Naarm the local oval was originally a small overflow wetland for Brushy Creek, before the creek was diverted and sent underground. Now it runs under the oval, which explains why the grass remains lush, even in the heat of summer, and why, on any given evening, birds flock there to feed.

Once upon a time there was a river…
Our rivers are never completely lost.